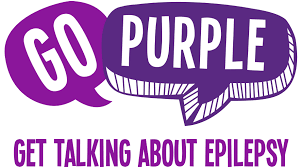 Purple day is March 26th. It is an international grassroots effort to increase awareness about epilepsy worldwide. Vikki, as Victoria prefers to be called, started raising awareness in 2017.

"I wanted to give back to the NHS for all the support they have given me."

Andover and District Mencap will also support Vikki buy holding a purple quiz and a purple dress up day on March 26th.

Vikki developed epilepsy while she was still a child, at 11.

"My first seizure happened in my math class.I blame my lack of math skills on my health."

Vikki has no idea what causes her seizures.

"I take medication and it helps but it has never completely controlled it. I wear a medic alert bracelet. If I have a seizure and 999 is called, the paramedics can read the number and know what medication I'm on. "

Vikki leads a rich life, although she can't drive, she loves horse riding and volunteers Fridays at Andover and District Mencap. Vikki also talks about her epilepsy at Mencap training days.

"I don't let it control my life. If it stopped me people would lose out on my fabulous sense of humour."

Celebrities who have epilepsy include Hugo Weaving (Lord of the Rings, The Matrix), Susan Boyle (Britain's Got Talent), Rik Mayall (film star and comedian) and musician Prince (Grammy award winner).

If you would like to help Vikki you can

1) Pop in on March 23rd between 10 and 1 to The Wellington Centre for a cup of tea, a purple cupcake and a nice break.

2) Donate £2 to enter our quiz. You can pick up forms from The Wellington Centre. We have prizes for the winners which we'll announce on March 27th.

3) On March 26th Wear purple to work or have a purple fancy dress day with a £2 entry fee, collect the funds and give them to Vikki at The Wellington Centre

All funds raised will go to help the Epilepsy Acton line. Your donations will mean they can open on evenings and weekends. They will be supporting people with nowhere else to turn.